This time last month we were getting glammed up to attend the 10th annual Event Industry Awards at the gorgeous City West Hotel. In the event industry this is the bee knees of award ceremonies and this year although we weren’t nominated – wiping tears from our eyes – we did have the pleasure of sponsoring the occasion with our new brand Mobile Escape Rooms. 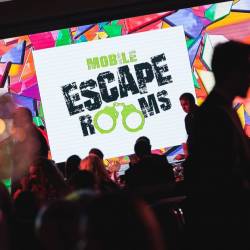 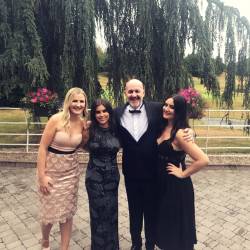 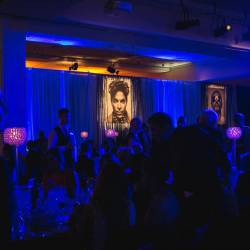 The preparations began weeks before the event itself and I’m not just talking about our beauty regimes! The day itself saw a lot of running around making sure everything was set, in place and ready to go when people arrived for the champagne reception. This is where we first met Fidget Feet, the amazing aerial dance theatre who poured bubbles while sitting on suspended aerial rings. The Mobile Escape Rooms were set up for all to see and explore. As we mingled with others from the industry were able to get a sneak peak of the Mobile Escape Rooms inflatable before the two teams went head to head in the live competition. 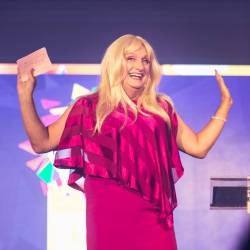 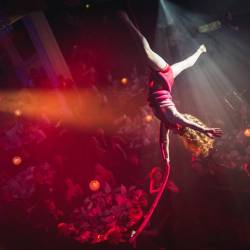 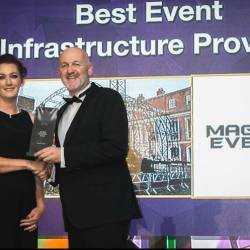 After the reception it was time for dinner, at this stage we were all starving and we were not disappointed. The City West Hotel did an amazing spread for everyone, my favourite being the mini dessert selection – delicious! The Whiskey Experts then gave us some taster whiskeys to kickstart the awards. During the awards, we showcased our Mobile Escape Rooms with a live competition. The lovely teams at Cogs and Marvel and Red  Hot Events volunteered with the hopes of winning a team night out in any restaurant in Ireland. It was a close race but Cogs and Marvel escaped in the fastest time and were later crowned the winners!

Mario Rosenstock A.K.A Miriam was our fabulous host for the evening, providing great laughs (some not so PG) throughout the night and introducing the créme de la créme of industry professionals in categories from Best Infrastructure Provider to Best Event Company. Throughout the awards, we were introduced to the top corporate entertainers in which we got to vote for our favourite – Fidget Feet took the win!

The night continued with an after-party boasting casino tables, The Mobile Escape Rooms, live bands and a silent disco into the wee hours. Our office is still talking about what a great night we had and how we can’t wait for next year!

We would like to say a huge thank you to the Event Industry Awards for having us, staff and The City West Hotel and congratulations to all the nominees and winners!