On Friday the 7th of July we hosted a Networking Summer Party for a group of 250 employees from Susquehanna at the Radisson St Helens Hotel. The aim of this event was to get everyone networking with each other and building team relations. Thankfully the weather was lovely that evening and all the games and BBQ were set up outside. Coaches were organised to transport the guests from their offices to the Summer Party in Stillorgan. Everyone was treated to Prosecco as they arrived on the lower Pembroke Lawn of the hotel which got everyone excited for their team building event. Guests were each given a cup with six chips for betting on the various games.

We had a number of inflatables including Penalty Shootout and Basketball Hoops. The Carnival stalls Dart a Card and Smash a Can went down a treat with our guests. We also had a number of our Cube games at the team building Summer party which brought out the guests competitive side. Our new Skills games got everyone working together. The Skills games included Lord of the Rings, Zig Zag Column, Catapults and the ever popular Tower Block. 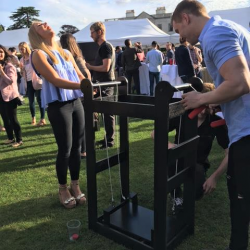 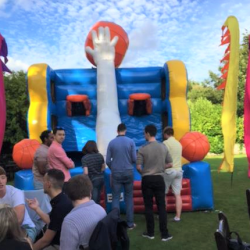 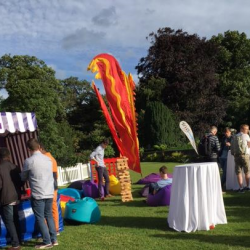 At the Summer party a  delicious BBQ along with a large selection of salads was served outside on the green. As always the Radisson Hotel provided great choice and it’s safe to say that there was no food left over by the end of the event! Throughout the event we ran a number of competitions where guests could win chips. The person who had the most chips at the end of the networking event was crowned the Susquehanna Champion! 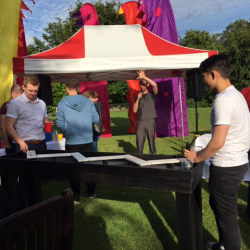 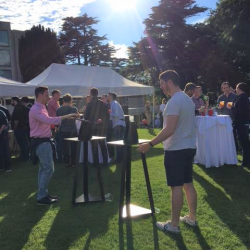 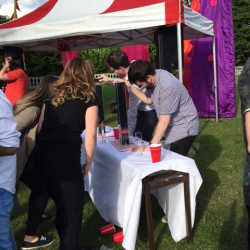 At the end of the Summer party coaches brought all the guests back into the City Centre. We would like to thank the Radisson Hotel for once again being an absolute dream to work with! We would also like to thank all of our guests from Susquehanna who were great sports and really got into the party vibe. We look forward to our next event with you!