Our Summers are always chock a block with Company Sports Days and this Summer is no different! On Friday the 9th of June we hosted a team building Sports Day for a group of 450 employees from Deloitte at the RDS.

Our team building Sports Days usually last for two hours and the weather managed to stay dry for the event. The two hours were jam packed full of different team building activities. The group arrived in great form which added to the excitement of the day and it was great to get outside and get involved in some high energy games! 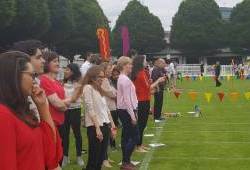 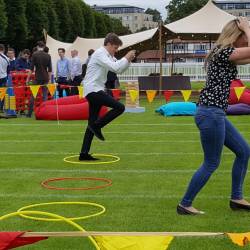 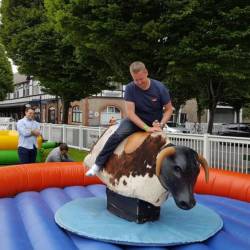 The goal of the event was to get everyone working together as a team with lots of fun added in too. Our Corporate Sports Days bring everyone back to their childhood with lots of our guests reminiscing of their school sports days!  Our MC on the day ensured to keep everyone’s energy levels up and helped direct people to where they should be while playing upbeat music and having some fun with our guests.

The group was split into teams of 56 teams of 8 people per team. The 56 teams were split into 4 groups and the 4 groups circulated around four distinct zones. Every team got a chance to compete again each other in each zone and there were lots of jokes and laughs between all of our guests. 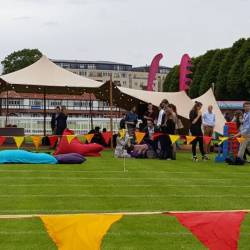 We had 4 different zones laid out in the grounds of the RDS. Each zone had a zone controller who explained and refereed the games and kept the scores for prize giving at the end of the event. Zone 1 consisted of the Inflatables area which was a free play area where teams could take turns on the inflatables as they wished. This zone certainly warmed everyone up and got them ready for the competitive sports day activities located in zone 2 and 3!

Zones 2 and 3 consisted of the team building Sports Day relays. These competitive zones saw teams go head to head on a variety of old school games and relays. A tug of war was organised for the two teams with the highest scores for a chance to be crowned winners. Everyone had great fun with the tug of war round!

Zone 4 consisted of the chill out zone where guests could chill out in a bright colourful area with picket fencing, bean bags, giant games like Connect 4 and Jenga. Zone 4 also consisted of a range of ‘The Cube’ team building style games as seen on the popular BBC series which went down very well with our guests.

Our Team Building Sports Day kept all of our guests engaged and excited for the day. Our guests spirits were at an all time high after this event, everybody had a blast! We would like to thank Deloitte for the great enthusiasm on the day which made the event even more enjoyable. We look forward to hosting  another team building event with you soon!